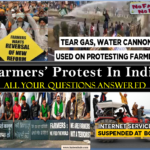 Farmers’ Protest In India: All Your Questions Answered

If you have been on the internet for a while or surfing newspapers, news channels daily, you would already have an idea that farmers in India have been organising protests against the new farm laws the Government is vigorously planning to implement. There had been widespread farmers protest in Delhi and neighbouring areas witnessed recently. The peaceful protests had also… Read more →