Farmers’ Protest In India: All Your Questions Answered 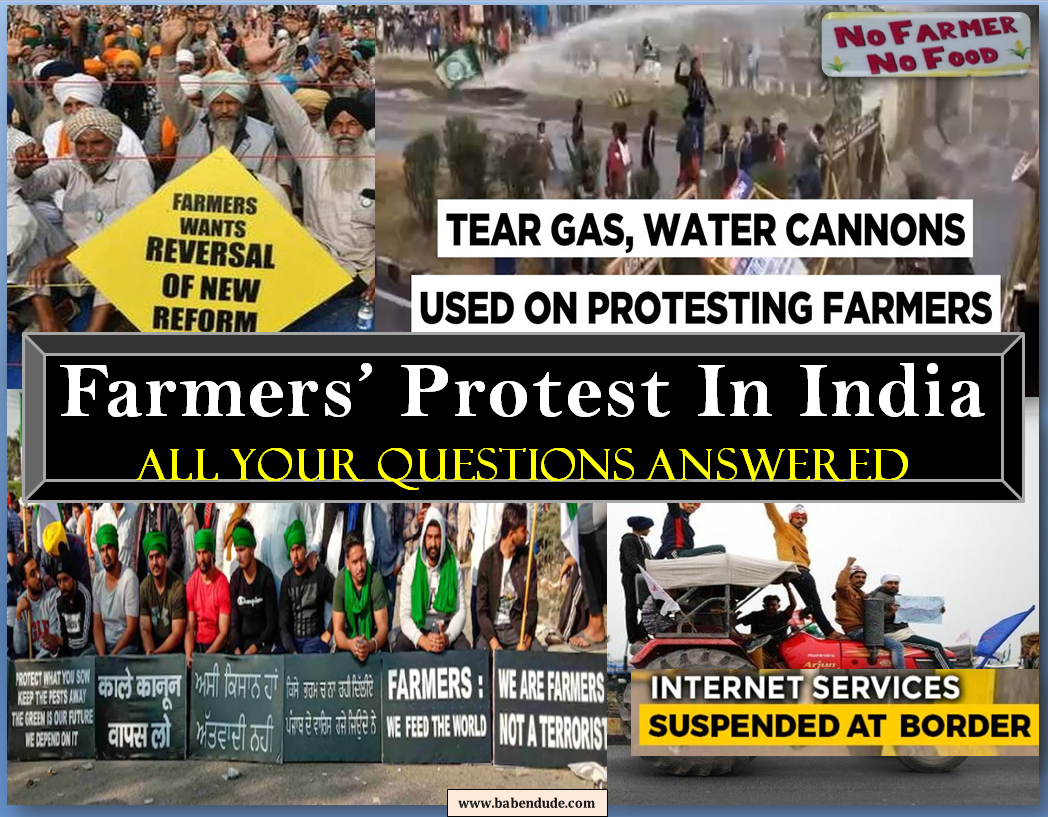 If you have been on the internet for a while or surfing newspapers, news channels daily, you would already have an idea that farmers in India have been organising protests against the new farm laws the Government is vigorously planning to implement. There had been widespread farmers protest in Delhi and neighbouring areas witnessed recently. The peaceful protests had also resulted in violence when the nation was celebrating its 72nd Republic Day.

At present, the central Government is trying to negotiate with the farmers but there is currently much dissatisfaction in the farmer community. Read on to know about farmers protest in India. Latest news that you are searching for is right here!

Why Farmers Across India Have Been Protesting For Months?

Claiming to provide new income opportunities for the farmers through their produce, the Indian Government had introduced the Indian Agriculture Acts of 2020 or the Farm Bills. The new farmers bill 2020 included three farm laws:

The focus was on encouraging private investments and improving the infrastructure in the farm sector, but on the contrary affecting the small and marginal farmers because their low output won’t allow them to bargain and they’ll get lower prices for their produce. Not to mention, the role of private players was seen as positive for the agriculture sector. However, Farmers community believe that because of this new law, the Minimum Support Price (MSP) system will be eliminated and it will impact their income.

When Did The Protests Start?

The farmers bill in India was passed in the Parliament in September 2020. However, the protests started in August, especially across Indian states of Punjab and Haryana. The Supreme Court had said it will stay the implementation of the three laws. In November, supporting the farmer unions, the protesters started moving towards the national capital.

The farmers protest Delhi and other regions witnessed included nationwide chakka jam and road traffic snarls. On 26th January 2021, a tractor parade was organized. However, it resulted in violence and loss of life of a protester.

The Farmers protest in Delhi and other areas have mainly happened over one of the three laws. The new agricultural law says that farmers are free to sell their produce inter-state and intra-state, online – anywhere and not just in the market place approved by APMC. And, farmers believe that they would earn even lesser than what they used to get earlier if they trade outside of APMC.

Why Is This A Political Issue?

The situation not only involves farmers, activists, celebrities who voice their opinions, but even political parties are divided on this issue. While the Central Government feels that the farm laws will work for the benefit of the farmers and appealed to the farmers not to be misled by those who are spreading misconceptions. On the other hand, the opposition parties and political leaders have been questioning the Government, seeking concrete remark concerning the conspiracy behind the farm laws. We continue to hear more about the ongoing farmers protest in India, latest news today and updates revolving around this serious issue.

Some of the main demands, the major farmers protest reason, are summarized below:

Recently after many rounds of talks around farmers protest, news is that the Government has agreed to consider two of the demands of farmers. The Government is in talks to consider demand of not levying fines for stubble-burning and of allowing subsidised power for agricultural use.

The farmers protest in Delhi and other regions in north India have been garnering the attention from across the world. Several communities in the UK and Canada who support this movement have been raising their voices and showing solidarity with the protesters. Canadian Prime Minister Justin Trudeau, climate activist Greta Thunberg, celebrity singer Rihanna are some well-known names, those who are backing the farmers’ cause.

Celebrities have been expressing their opinion about the issue through social media platforms. Also, international media have been closely tracking and covering the protests and violence that followed. Check the live news on farmers protest to know the notable personalities and celebrities who have joined to support the farmers.

Has There Been Any Progress With Negotiations? Latest Update!

Amidst the chaos and news platforms trying to highlight the plight of the protesting farmers, the Central Government has been holding talks with farmers, but currently there is much dissatisfaction in the farmer community over how the Government has handled the situation. The Ghazipur border was the location for the recent farmers protest. Delhi and Uttar Pradesh state had beefed up security by deploying police and paramilitary forces in the areas.

← SEO Content Writing For Every Business – Need & Importance
YouTube Videos For Business Growth: Everything You Need To Know →