Top News Stories Of 2020 Round-Up : From Pandemic To Protest 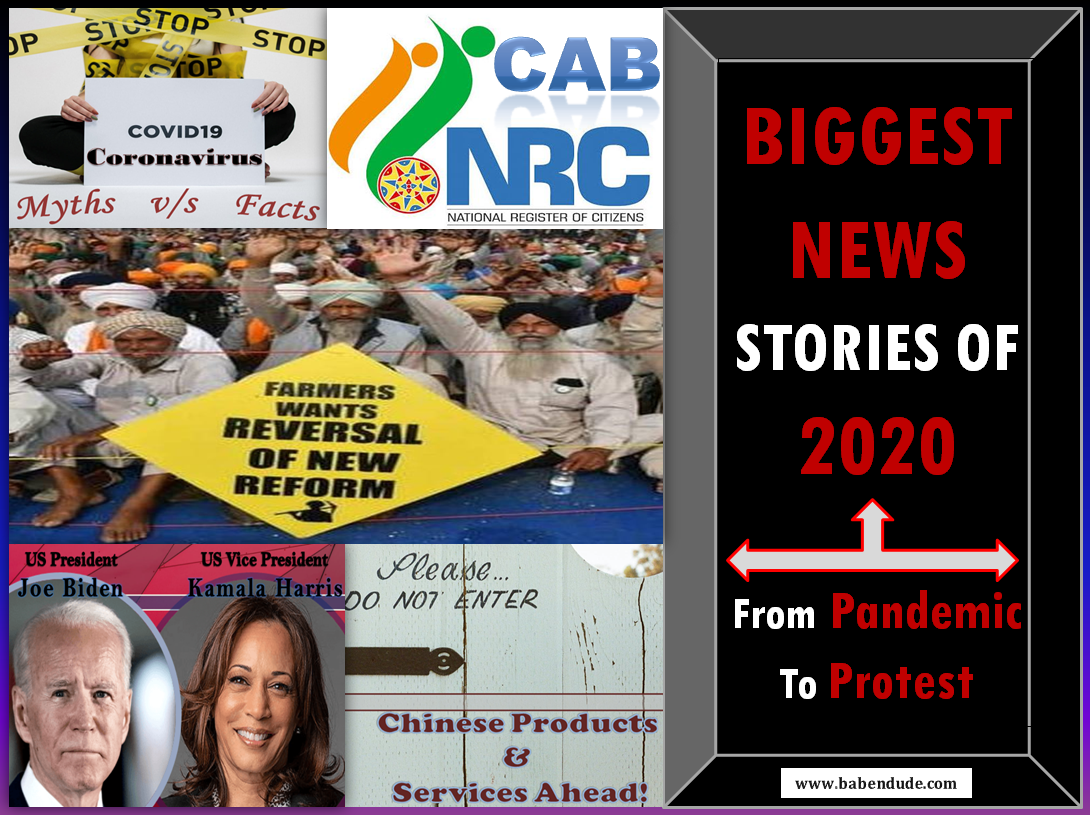 ‘2020’ year will be remembered as a ‘Cursed Year’ as this year had changed everything for everyone and forever. 2020 has ruled with some of the biggest news stories which made our lives worst. People lost many of their loved ones from the Coronavirus epidemic. The whole year contained world-changing yet paradigm-shifting developments. In India, predominantly the pandemic, protests, and political face-offs dominated the news space. There were series of unforeseeable events from Coronavirus pandemic to Cyclones, from Economic Disruptions to Chaos around India’s Borders. Everywhere there are moments of despair, misery, gloominess all around that have trembled the economy and shook the whole world as never before. Let’s have a glance at some of those biggest news stories worldwide.

The Farmers Bills is intended to change the way agricultural produce is marketed, sold, and stored in India. The Farmers from Punjab, Haryana, and other states are protesting against two bills – Farmers Produce Trade and Commerce and Farmers Agreement on Price Assurance and Farm Services Bill, 2020. Farmers fear that the new bills will weaken the Minimum Support Price (MSP) mechanism, deregulation of crop-pricing would be there, the Agriculture Produce Marketing Committees (APMCs) will also come under threat from the new farm laws and they also fear that corporates might usurp their land which will have a deleterious effect on farmer’s livelihoods. The day farmers’ ongoing protest completed 23rdday, PM Modi virtually addressed a farmer conference in Madhya Pradesh and made it clear that Government is ready for more talks leading to probable amendments. On the contrary, the Central Government states that new laws ensure contract farming. (Info. till Dec’20)

Stay tuned for more latest updates on this ongoing protest.

More than 80 Million confirmed cases of COVID-19 have been detected globally since the pandemic began. The countries with the largest number of cases are the United States, followed by India. The first case of Coronavirus in India was detected in Kerala state on 30th January’20. It was a case of a medical student who returned to India from China. Wuhan city in China was the most affected place by the deadly Coronavirus. However, by March, the virus has spread to Delhi, Hyderabad, Bengaluru, and other places in India. Mass gatherings during Hindu festivals at various locations, Tablighi Jamaat event at Delhi Nizamuddin are some of the events that became super spreaders.

Due to increasing cases, the country was under complete Lockdown which halted most of the economic and social activities except essential services. Healthcare facilities were roped in and isolation centers were set up across the country. Now, the only hope is the vaccine being developed on a war footing and being distributed across the country through proper logistics and systematic planning. It will be available soon as per the reports but healthcare workers; corona warriors are the ones who will get the vaccination first. (Info. till Dec’20).

As the virus was spreading rapidly, India saw a humanitarian crisis with the lockdown impacting Millions of immigrants. Immigrants stranded at railway stations, bus stops, highways, wanted to reach their hometowns by hook or crook. Many laborers traveled barefoot with their families and belongings to their respective hometowns in Uttar Pradesh, Bihar majorly. Some migrants lose their lives due to hunger, road accidents exhaustion, heatstroke during the lockdown period, and crisis state.

Kamala Harris has made history as the first female, first black, and first Asian American US Vice President-elect. Joe Biden, 77-year-old former US vice president has become the 46th president of the United States. There was an explosion of joy and happy tears in many cities across urban America as people came out on the streets dancing and chanting. Indians in Harris’s ancestral village celebrated her projected win.

On 5th May, there was a scuffle broke out between India and Chinese forces which have encroached on the Indian border at Pangong Tso Lake in Ladakh. Soldiers from both sides were engaged in stone-pelting and fistfights. June 14 saw a group of People’s Liberation Army (PLA) soldiers erected tents and observation posts on the LAC. A senior army officer along with two soldiers went unarmed to meet the Chinese counterparts and discuss de-escalation measures. They were attacker with iron rods and barbed wires, unprovoked. Resulting hand to hand combat, 20 Indian army personnel, and 43 Chinese soldiers were killed. With anti-China sentiments flared in India, with a call for banning Chinese goods, our Indian Government reacted by banning 59 mobile apps developed in China along with several infrastructure projects for which Chinese companies have won contracts.

ALSO READ-  List Of Chinese Products, Services, & Applications, Can Be Banned In India

PM Modi laid down the foundation brick for the Supreme Court mandated Ram Temple to be constructed in Ayodhya. A 40kg silver brick was laid down as the foundation stone. The construction of Ram Temple has been in the voting manifesto since 1991. In the year 1992, the demolition of the Babri Masjid by Hindu nationalists triggered widespread Hindu-Muslim violence PAN India. Now, the Ram temple is about to get constructed in the period of 36-40 months as per the Temple Trust.

5 Rafale Fighter Aircraft, which arrived in India from France on 29th July, has been inducted into the (IAF) Indian Air Force. It is marked as Rafael Day Induction. This also marks their operational induction. It is termed as an important step in the light of the prevailing security conditions that have created at India’s borders. Adding Rafael has put a stronghold into India’s security portfolio. The IAF plays a crucial role in maintaining military deterrence and their actions play a significant part in future wars. Considering the prevailing situation in India’s boundaries, cross- border terrorism amid current security challenges, vigilance is the first measure of security that should not be ignored. India’s responsibilities are not restricted to the land borders alone, Indian Armed Forces are also working continuously with international communities to strengthen world peace.

To boost India-US relations, the “Namaste Trump” event has been organized in honor of former American President Donald Trump. The event, titled “Namaste Trump”, was a response to the “Howdy Modi” event held in 2019. More than 1 Lakh people gathered at the Sardar Patel Stadium for the Nameste Trump event. On Trump’s part, he took PM Modi’s name 12 times and mentioned India 50 times in his speech. Donald Trump and Lady Melania Trump also visited Sabarmati Ashram. Trump also told that India would hold a very special place in our hearts. PM Modi emphasized on the common values shared with Donald Trump – shared values and ideals, the shared spirit of enterprise and innovation, opportunities and challenges, shared hopes and aspirations.

ALSO READ-Donald Trump India Visit- All You Need To Know

Women and Students of Jamia Millia Islamia University face security forces as they march to parliament to protest against the ‘Citizenship Amendment Act’ and ‘National Register of Citizens’ in Delhi, India. The protests across India have erupted since the new Citizenship Amendment law came into existence. The move sparked widespread national and overseas protesters against the act and associated proposals of ‘National Register of Citizens’.

This has come as a shocker to the Royal family. The Duke and Duchess of Sussex have announced that they’ll step back as “senior” royals and work to become financially independent. They will no longer use the titles – His Royal Highness and Her Royal Highness and repay the housing expenses. They said they have made this decision to step down as royals post many months of reflection and internal discussions. They are working on the launch of their new non-profit organization which will work on public work – The commonwealth, community, youth empowerment, and mental health collectively.

Another Important News Story Is…

For months, there were protests in Hong Kong, street battles between protesters and police, but in the end, Beijing impassively refused to offer any compromise, rather passed “The Law of the People’s Republic of China on Safeguarding National Security in the Hong Kong Special Administrative Region.”

Because Hong Kong falls under Chinese sovereignty, China’s ruler, Xi Jinping has imposed a controversial security law for Hong Kong citizens. This law makes it easier to penalize the protestors, curtails protests and freedom of speech, lessens the city autonomy, and eliminates the institutional barriers from China’s totalitarian rule effectively.

This year was full of drama, suspense and agony. Let’s hope 2021 the year of prosperity to everyone and brings growth, development and majesty to all.