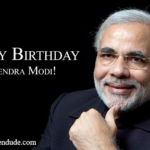 PM Modi @70: Things To Know About Modi Government On His Birth Anniversary

India’s 14th Prime Minister Narendra Damodardas Modi turns 70 today. Born to a Gujarati family on September 17, 1950, Modi served as Gujarat’s Chief Minister for nearly 13 years (from 2001 to 2014). In the year 2013, Modi is chosen as the Bharatiya Janata Party leader and started the first tenure of his prime ministership, after his swearing-in as the… Read more →