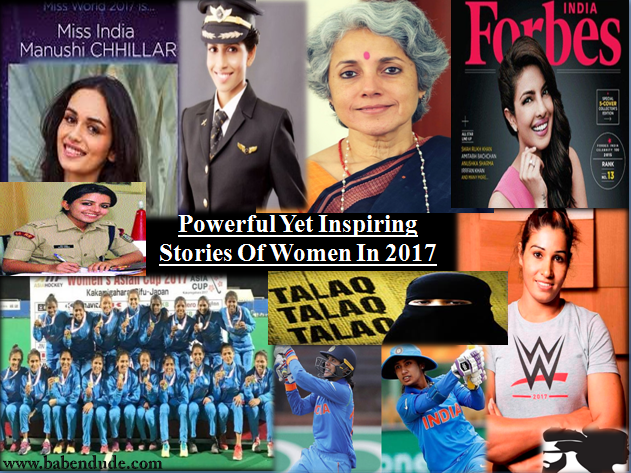 The 30-year-old woman made headlines this year after she became the youngest female commander in the world to fly a Boeing 777. Anny went to Indira Gandhi Rashtriya Uran Akademi (flying school) after obtaining a scholarship and finished her training by the age of 19. Shortly thereafter she worked with Air India.

The winner of this year’s Miss World competition was the young Manushi Chillar from Haryana. By refusing to adhere to stereotypes and conforming to what was expected, Chillar showed that one could accomplish anything with enough courage. The medical student-turned Miss World title holder, impressed judges and outperformed her counterparts to win the title.

Dr. Swaminathan is an Indian pediatrician and clinical scientist known for her extensive work on tuberculosis research. In October of 2017, she was appointed as the Deputy Director General of Programmes at the World Health Organization. This was one of the first times that an Indian woman garnered so much acclaim and attention on a global health platform and truly was a proud moment for India.

Another landmark for women in sports this year was the Indian Women’s Hockey Team’s win at the Asia Cup. The team brought home the title after beating China 5-4. By doing so, they also qualified for next year’s World Championships as the Continental Champions.

Priyanka Chopra was one of the most prominent people named in Forbes’ magazine’s “World’s 100 Most Powerful Women.” An actress who started from a very modest background, she has now gone on to star in the American TV series “Quantico,” and has also been named as one of UNICEF’s Global Goodwill Ambassador. She is the first Indian actor to play the lead on an American series.

Indian women are no newcomers to sports, but this year Kavita Devi went one step further and became the first Indian woman to sign a contract with WWE- World Wrestling Entertainment. She is a powerlifter who won gold at the 2016 South Asian Games.

A landmark victory for women occurred this year after the Supreme Court stated that Triple Talaq was no longer valid. The statement came after a petition started by Shah Bano Begum who challenged the practice.

Merin Joseph is the DCP of Kozhikode. She was in the news earlier this year when she decided to firsthand assess the safety of the streets at night for women. Joseph, along with two other female constables, decided to walk the streets at night to find out exactly how safe women are. The three were in plainclothes disguise and were able to gauge what measures need to be made in place for women to feel safer.

Following the mass molestation which occurred in Bengaluru’s MG Road and Brigade Road last new year’s eve, women organized a protest on January 21st 2017 to reclaim the streets. The concept was to shed light on the horrific incident which occurred and as a protest to show that women would not step down. In a world where the victims are often blamed, the protest staged encouraged women to be themselves and not to let themselves fall prey to victim blaming.

Top 10 Laws Of 2017 Pushing India To A Brighter Future